Hi. I'm a total rookie at this whole blogging thing, so bare with me. I'm sure all of you reading this have heard how our story started six months ago, so I'll skip re-telling what happened on September 23, 2015 and tell you what's been going on these last six months.

Though it felt like at least an hour, our physical fight with our attacker was really only six minutes. He came into my bedroom window at 12:01 am and was pronounced dead at 12:07. Among many feelings, I remember feeling so annoyed with the detective asking, "Are you sure it was an hour fight?" I was cold, scared, and in a lot of pain. Three E.R doctors just finished stitching up my stab wounds. I had to wait until I was finised talking to the detective to take any sort of pain medication, so I'm sure my annoyance was also coming from wanting pain medication so badly. I was more surprised than anyone when we found out the attacker was only in our house (alive) for six minutes. Those six minutes of fighting were the longest six minutes of my life.

Before the attack, I had never hit someone like I was hitting him. When I knew he was dead, Kayli was okay, and I was going to survive I thought our fight was over. Little did I know our six minute fight was just the warm up to the fight we've been fighting ever since.

Fortunately, the chances of you fighting an ex-convict are very very low and will most likely never happen. (I would love to say, "never happen" but because it happened to me, it's harder for me to take away the teeniest possibilty of it happening). During these last six months I have learned there are harder things than physically fighting a crazy ex-convict. Some of those things include; forced change, depression, anxiety, anger, feelings of poor self worth, fear, nightmares, feelings of being used and violated, and much more.

There have been low moments and hard days where (I know this sounds bizarre) I'd rather throw punches with my attacker than go through the heartache, confusion, anger, etc that he has caused. There have been days, where I'd rather throw punches with him than not be able to leave the house on my own or to have a good night rest in MY bedroom without being too scared to close my eyes or woken up by another awful nightmare. There have been moments I'd rather be throwing punches with him rather than taking depression medication, feeling worthless, or feeling completely violated. Our physical fight was terrifying. NO ONE deserves to go through what we went through that awful night, but the point I'm trying to make is, just because our attacker is dead and we're no longer swinging punches our fight is far from over. Even six months later.

My only purpose in sharing my fight story is to hopefully help girls who are fighting. Fighting an illness, infertility, addiction, a number on a scale, an abusive relationship, depression, anxiety, loneliness, poor self esteem, bullying, the aftermath of someone else's decisions, or even a bad hair day is still a fight. Just because our fights are different, doesn't mean one is scarier than the other. I want you to know, you're not alone. We're with you & want to help throw punches in whatever it is you're fighting.

I hope you will follow our blog as I "real" talk about what my healing process has been like since the attack. I plan on being as real and as raw as I can, in hopes that my fight will help you remember to keep fighting.

If Kayli and I stopped fighting September 23, we would have been brutally murdered. Our attacker had one intention- to not only kill us, but kill our futures, dreams, goals, relationships, friendships, potentials, everything. I echo the words of Elder Holland, "Angels are still sent to save us."

We hope we can be the angels you've been looking for/needing in your fight.

Keep following as I open up about my fight to heal.

a lot of love & punches, 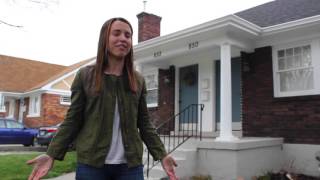